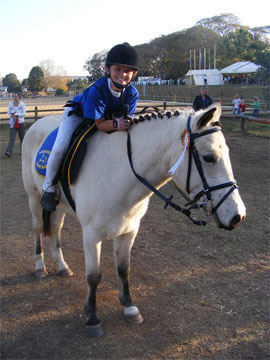 Pony Club is a movement which had its origins in England in the late 1920's and since then has grown to become the largest world riding body and one of the worlds biggest youth movements. While Pony Clubs are primary places where youngsters under the age of 21 years who are interested in ponies/horses learn to ride and care for their animals, the movement teaches far more than the basic skills. Discipline, Leadership, Sportsmanship and Character are all developed through the principals on which Pony Club is built.

"As a member of The Pony Club, I stand for the best in sportsmanship as well as in horsemanship. I shall compete for the enjoyment of the game well played and take winning or losing in my stride, remembering that without good manners and good temper, sport loses its 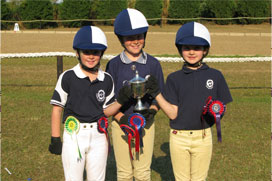 cause for being. I shall treat my horse with consideration."
The Pony Club is an international youth organisation which helps to develop equestrian sport by encouraging young people to have fun whilst learning to ride, and to take good care of ponies or horses.
Pony Club also encourages young people to enjoy a variety of sports associated with horses and provides instruction in horse riding and horse care. Our holistic focus means that we also develop the character of our members, by promoting sportsmanship, respect for  animals and people, self-discipline and strength of character.
The South African Pony Club is the foundation of countless sports riders in our country. The excellent ground work that the SAPC strives  to put in place has formed a firm footing for many top riders and instructors in this country, and around the world.
There are SAPC branches in five regions throughout South Africa; Gauteng, Limpopo, KwaZulu-Natal, East ern Cape and Wester n Cape.

The Pony Club was founded in Great Britain in 1929 and has become the largest association of riders in the world. It is represented in no less than 14 countries and has a membership exceeding 110,000.

Whether you have your own pony or not, Pony Club is the best starting point for all children who want to learn how to ride.

We offer two types of Membership: 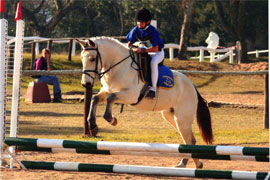 The SAPC uses the same efficiency test system as the UK Pony Club. These tests are designed to assess Riding and Horse & Pony Care in a structured way. There are a number of tests ranging in difficulty from D, which is the easiest, to the A test Riding, which is the most difficult. These efficiency tests are recognised throughout the world and are considered the best preparation for any young person hoping to make a career out of their interest in horses. The SAPC has been the nursery of many great riders and horse masters.

Inter Branch and Inter Regional Competitions
A number of inter-branch competitions and activities are organised by regions during the course of the year in various disciplines,  including Dressage, Equitation, Show jumping, Working Riding, Mounted Games, the Annual Children’s Hunt and the Quiz. The emphasis is on participation rather than competition and team events are encouraged over and above individual competition. Members are encouraged to develop co-operative skills, and good sportsmanship is valued above individual skill.

Each year the National Committee of the SAPC arranges an Inter-Regional Team Championship Show. Members chosen to represent their region in these competitions are awarded Regional Colours.

International Events
The SAPC promotes the exchange of ideas between branches, regions and countries. Members of the SAPC have had the opportunity to visit the United States, New Zealand, the UK, Kenya and Botswana. In return, those countries have sent visiting teams to South Africa.  These exchanges have been huge learning experiences for the members involved, as well as lots of fun.

It all began when Muriel Higgs brought Pony Club to Natal from the UK in 1934 to her small riding stable on the Berea near Hutchinson Park in Durban.   In 2004 the KZN Region celebrated its 70th Anniversary at the 2004 Inter-Branch.

Life Members of the South African Pony Club
The South African Pony Club awarded Life Member Badges at Interbranch 2008 to three of its most staunch supporters, these ladies have given and still give their time to the pony club movement.   They are Dawn Nissen, Joan Pinnell and Doreen Whittle.     Lindsay Morris and Ian Marr were awarded life membership of SA Pony club 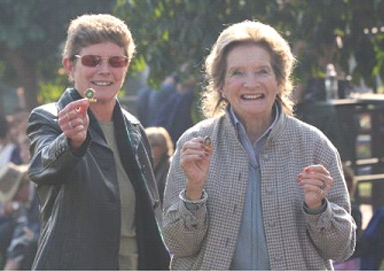